I am moving this blog to akeythatshouldnotbeused.com! Feel free to follow over there!

I took a sort of extended period off from coding, which was in retrospect kind of dumb, because most of the C# skills I was trying to amass are gone. I did end up purchasing the Xamarin IDE- a sales rep got them to knock some money off the price, to the point where I could afford it.

In the meantime though, a friend of mine had asked me why not just write the app for the web? It’s definitely doable. But in order to code PHP, you need access to a server, preferably one you control enough to use FTP (as in the coding process you’re making frequent changes, at least at my level), or some sort of desktop server emulator that I don’t have.

So I bit the bullet, sunk money into a developer hosting package from name.com (which allows me to host up to 10 domains), and started working.  END_OF_DOCUMENT_TOKEN_TO_BE_REPLACED

I decided that, for now, I am going to stick with the C#/Mono framework, but I’m going to stop trying to develop the app for right now. I will be reading the C# yellowbook to try and legitimately learn more about what I am doing before I try to build again.

So, I spent most of the day working on the app. I made more progress, but it was grindingly slow.

I decided against SQL for the time being, instead opting to write the performer names into a string array in an XML document, and then call that data to populate a “ListView” in the XML layout file. I eventually, after searching and searching, found that the first wall I had been up against (that it couldn’t find the file path to write the file, and was throwing an IO.Exception) was caused not by my code, but by an idiosyncrasy related to the IDE/compiler/platform, ie, that you needed to use this command to FIND THE PATH FROM INSIDE THE INSTALLED APP-  String path = System.Environment.GetFolderPath(System.Environment.SpecialFolder.ApplicationData);

and then I did

which I used in the Xml.Doc writer part to write to the XML file

END_OF_DOCUMENT_TOKEN_TO_BE_REPLACED 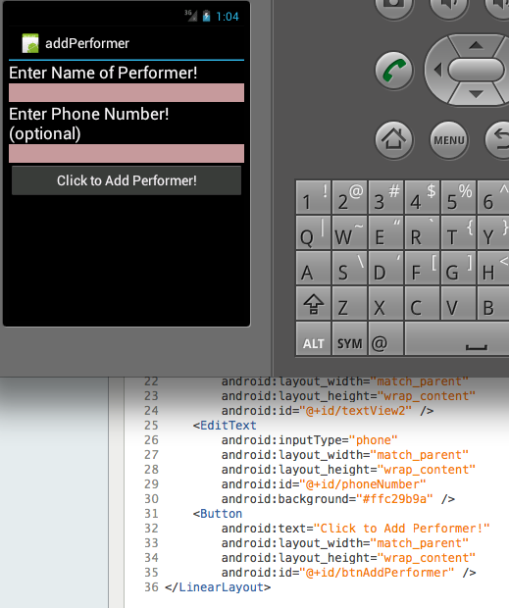 Today it was raining most of the day. The people I work for had the water almost up to their house, and here I was more concerned about the bridge washing out and being trapped. That didn’t happen, but there was no work. So most today was spent coding. I was able to do a rough layout for my open mic app, mostly by watching this tutorial and using what he was doing as a way to understand how Android apps are set up. I have a better idea of how it works now. The above picture is a screenshot of the Android emulator, running my app. So far, I have a start screen where it has two buttons, Add Performer and View List. 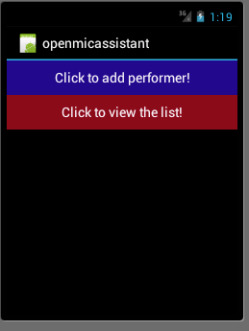 Because the problem is that everything I’ve done so far has been mostly window dressing. I’m down to the real nuts and bolts of the app, which is data handling. It’s very little data, but I need to be able to take the user input (performer name) and store it somewhere so when the user views the list they will see what they put in. That’s the functionality I’m trying to get now, but I need there to be more. There’s a lot of ways you can do this in Android. You can store it in preferences. Or in a SQLite database. Or (what I was trying to do) in an XML file.

I’ve hit a few different walls here, and am thinking that for what I’m trying to do, I should maybe just bite the bullet and do SQL, because it’ll be easier to modify the data once it’s in. I tried XML and had issues with a few different things, including parse errors and even file paths (I don’t fully understand the file structure yet, or syntax, or anything really. I’m kind of fumbling through every aspect of this, including the C# object-ness. Not to mention XML , I’ve never done anything with it at all. At least it is similar to HTML in some ways).

But still. It’s basic, and it’s not anything yet, but I’m still proud that I was able to do some work on it. For me, even getting it so the buttons do stuff when you press them is a big deal, it’s way more than I had before.

The class I have been taking in order to learn to code (click here for more info) is now over. In some ways, I’m kind of glad. Traveling 20 miles each way 3 nights a week was a large time commitment. On the other hand, I’m not as far along as would have been hoped, and am going to have to figure a lot of stuff out on my own, and with the help of the internet.

Like C# for example. Didn’t even scratch the surface in class. It probably wouldn’t have been my first choice as a language, but I can do stuff with it that I want to be able to do. The syntax is similar to PHP in a lot of ways, and I can (if I learn it) use it to build desktop and cellphone applications.

Right now I have an idea for a simple program I want to build using C#. It will be an assistant program for open mic hosts (iteration one) and for waiting lists at restaurants (iteration 2). In its most basic form, I need a user to be prompted to enter the event start time, then to have the option to either enter performer names or view the list, and, when the view option is chosen, to show the names listed out in the order they were entered, paired with stage times. That application has been written in C#, I did it last week in about 3 hours.

Here’s the code, it works.

END_OF_DOCUMENT_TOKEN_TO_BE_REPLACED 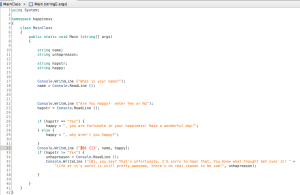 The experimentation continues. I haven’t had that much time to fool with C# yet. Been on the road visiting family for a few weeks and there was no wi-fi where I was staying, so I couldn’t look up syntax if I hit a hitch. Because of that, I had to stick with things that were very simple.

However, I did complete this little gem. Nothing fancy there, just a program to experiment with console/terminal apps and loops in C#… but I always try to have fun with stuff like that by making things that are either silly or profound. With this one, you can be the judge of which.

So, the attempt to install Windows on the Mac did not go well. I’m running a macBook with Maverick on in trying to install Windows 7 and dual boot with BootCamp. I got the hard disk partitioned, and then had to have Windows reformat the partition, which went ok. But during the actual install it hung, repeatedly, while trying to decompress some of the files off the install CD. I got frustrated after two or 3 times and cut out, and forced the mac to boot back up in OS X.

I may fool with this later, but what I am doing for now is leaving Windows off my machine. I found a program called Xamarin Studio that uses the mono framework. It’s designed for cross-platform development using C#, and runs natively. Also, it’s shareware- I won’t have to pay until I get to a higher level as a programmer.

I tried it and it seems to work for what I need it for at this stage. Right now I’ve succeeded in writing a console application that outputs text. Yay!

For now though- there’s not any real need to mess with it. This class and this language is the only reason I’d even consider running Windows… if I can get around this and not do it, I’m not going to do it.

So, this is the beginning. This blog is something I’m starting relating mostly to my studies in coding, an adventure that started about 4 months ago.

Back in late January, I quit my job as caregiver at the Elephant Sanctuary, where I had worked on and off for a long time. Five of the last seven years of my life had been given to that place and to those animals. Without going into detail, I left because of issues with decisions made by upper management and how they affected both people and elephants.

I immediately found part time work as a maintenance person for one of my previous employers, and between that and other side work have been subsisting. Some of that has to do with the fact that I am living in my friends house- otherwise my options would be a lot more limited right now.

Around that time, I also began to attend a coding class affiliated with my friend’s work. It has been challenging at times, but I’ve ended up with a completely new skill set. So far, we’ve studied HTML, CSS, and (mostly) PHP. A little mySQL also. Last night, the class started working in C#. Not me, not yet. I have a Mac, so using that likely means putting Windows on my machine, plus getting special software- this falls in the “not so easy” category. That’s where I’m at right now, hoping not to brick my machine doing it, and swearing a lot.

A guest speaker at the class suggested starting a blog, I figured starting to learn a new programming language and starting to use Windows for the first time ever was a good time to do it. So here we go. This will at least for now be about computer stuff but I expect it to become more scattershot in terms of content, and for music, philosophy, etc. to find their way in here.